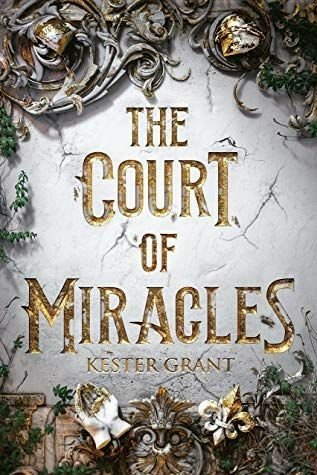 The Court of Miracles by Kester Grant is a retelling of Les Miserable with magical elements, an enormous cast of characters, and a revolution. There are many different courts one can attend within this gorgeously filled, world building fast paced plot. The characters are each unique and intriguing. There are nods towards Les Miserable, but it’s been so long since I read Les Mes that I’ve likely missed even more appreciative nods towards the work.

This book was long. It was complex. It had plot, it had depth, and it had characters that I fell hard for. It took a solid week to read this book, and that was only because I lingered over it for days, relishing in the excellent fantasy retelling. Most retellings don’t impress me these days, with a few rare exceptions thrown in. This is an exception. I adored this book. I wish to own this book. I’ll probably buy a hardcover of this book.

“Les Misérables meets Six of Crows in this page-turning adventure as a young thief finds herself going head to head with leaders of Paris’s criminal underground in the wake of the French Revolution.”
~As quoted from Goodreads

Now, while I’ve yet to read Six of Crows, I have read Leigh Bardugo, and this is a safe comparison to make, as I also adore Leigh Bardugo’s crafting into world building. One would be pleased at the historical elements flung into this book, along with the epic fantasy twists and turns, the thieves, the murderers, the magic that revolves around the various courts. I’d love to dive into the courts, but I barely recall most of them, and I desperately need to do a re-read, take notes, and keep up with characters of whose alive and whose not. I warn readers, do not get attached. That could prove fatal to you, should you do so.

There’s a spark of romance within the pages as well, along with myths thrown in I think, if I recall correctly. It’s admittedly been a bit since I’ve read the book, and as stated above, I need a reread. However, the story is still fresh in my mind enough that I feel safe in giving it 5/5 stars. I highly recommend for all fans of retellings, and that of historical fiction, or classics in general. Please read this. You won’t regret it.

Until next time,
Pass Me That Book