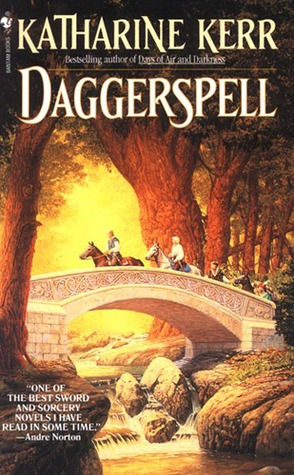 Daggerspell was an interesting fantasy novel. I loved the start of it; Jill’s character seemed to really develop as she lost her mother, and then met her silver dagger father who is labeled one of the most dangerous men in the country. Jill leaves her little village with her father after her mother dies, and winds up traveling across country, helping his father stopping family fueds, finding coin, and so forth. Jill has her own secrets too though, much as her father doesn’t like it-she can see and speak to the Wildfolk, Fae creatures. He forbids her from attempting to do so again, even as he explains that were people to see her doing such strange actions, they would consider her a witch.

This was a fun fantasy, and I wish I’d read it when I was years younger, back in my teens would have been preferable, because it definitely felt a bit dated at times. There’s some neat battle scenes, some love interest, a prophecy of sorts revolving around Jill, and lots of history and magic explained throughout the book but not wordy and never in the boring fantasy way that some books seem to have.

For those who were wondering if this book was worth it? I feel as though it is. It’s entertaining, though not wholly gripping it’s definitely got potential as a series, and though I’ve heard it from many people that book two is easily the worst in the series? I’m still willing to press on and see where the story goes.

4/5 stars for a unique and fun read, though not quite as powerfully fantastical as some other classic fantasy I could name, still definitely worth giving it a try.

Until next time,
Pass Me That Book