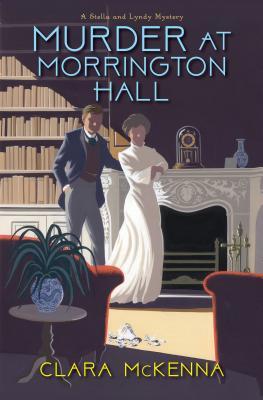 This was utterly delightful, and exactly the kind of book I’d been hoping for here as of late. A cozy mystery but with plenty of drama, a tiny spark of rebellious romance, and a good old fashioned ‘who-dun-it’ air!

Stella is an excellent female detective, and I loved her personality. While I hated most of the others around her, who are overbearing and downright hateful towards her at times, I did enjoy her steadfastness and intelligence, her wit and her daring throughout the book. She drove the old American cars without caring who saw. She wore trousers beneath skirts, rode horses and cared for them, baked in a kitchen despite the fact it was far beneath her station, was kind to servants and remembered their names and helped them whenever she could…just a basic, all american good lady.

Yet she’s taken aback and furious when she learns that the reason she and her family are visiting in England at a prestigious families house isn’t for the upcoming Derby and her horses, but because of an arranged marriage her father had created between her and Lyndy. She hates to be thought of as nothing more but a prized stallion to be bartered with and traded about. Even worse the implication once she’s done her duty and produced an heir and a spare, then he could just push her aside and find plenty of mistresses to fill his time with, never giving her any time of day unless it was important enough for him to do so.

There’s a fair bit of ‘women aren’t meant to do that’ in this book, which was infuriating to say the least, but Stella remains stubborn and prideful, though the others call her head strong and dangerous. I mean really, just because she bucks tradition, she’s considered to be ‘full of herself’? That’s ridiculous! I understand it was the times back then, but many women and men I very much wish to strangle. Grr…

Stella and Lyndy both talk, and get to know one another as they are now for all intents and purposes, engaged to be married. Stella wishes to speak with the vicar, and so while giving her a tour of the house, the two of them wind up to the library where they find the vicar…quite obviously dead, and in no mood to talk.

There’s an eventual missing horse, missing jewels, a meeting with the King while at the Derby, and more exciting adventures throughout this wonderful first novel. Stella is a true inquisitive lady, determined to figure out who killed the priest that was supposed to be the one to marry her, while Lyndy attempts to figure out who stole the jewels and their families latest and newest horse that was part of the wedding deal from Stella’s father.

(No harm comes to the horse at the end of the book, for those that are worried. It’s returned safe and sound, with not even a scratch on him-bonus points to the author for making sure the animal remains unharmed!)

I really enjoyed this book, and am now adding this author to my favorites list. This was clearly well written and researched, and there was a large cast protrayed so that one could continue to guess and still be surprised by the end of the book. I was half-right in who committed a certain crime, but the author surprised me completely with who was actually the killer, so more bonus points towards her as well. Though I’d paid attention, there were a couple of things I hadn’t considered towards the end of the book, and that was how she’d managed to surprise me, the sly writer.

5/5 stars for a splendid read, and I definitely aim to read more of this series as time goes on. For those that like Rhys Bowen’s Royal Spyness series, you might give this a try. Same kind of style, though not in journal format, it’s still got the adventurous feel and strong female character to enjoy reading throughout.