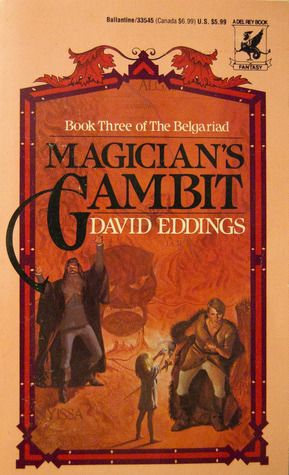 I just read through books 1 and 2 of The Belgariad, and really enjoyed both of them. Of course, this is my fifth time re-reading book 1 “Pawn of Prophecy”, but I have never finished the series, due to it taking me literal years to find and collect all the books to the series that had matching covers. I’m planning on just binge reading the entire series in the next couple of days, but there are a few things that I wanted to talk about in regards to the books.

#1: Murgo’s: From what I recall, aren’t they a main race in the Wheel of Time series? *Check into that* Did David Eddings rip off Robert Jordan, or vice versa? Are Murgo’s also part of the Tolkien franchise?

#2: Brill: he reminds me very strongly of a character in the Wheel of Time series as well. Perhaps ya’ll might remember the Peddler Padar Fane*? *check name* He also had a bad habit of showing up when not wanted, and turned out to be pretty much as evil as evil gets.

#3: Salmassra: She reminds me strongly of this scene from Outlander, when she kidnapped Jamie’s nephew Ian. Garion didn’t suffer nearly as much as poor Ian, yet the scenes ring rather similarly, for me.

#4: Aunt Pol: Garion’s words of her living for four thousand years and being a cold heartless woman ring true, yet there’s also her unexpected caring side from time to time. Still, I don’t much like her as a character. I find her to be rather manipulative and overly harsh towards others at times.

#5: Riding/Walking/Running: There’s a lot of all three going on quite a bit through these books, as they travel to fulfill the prophecy. Normally, I like reading about these parts, but sometimes it can get rather redundant.

#6: Prophecy: Most prophecy’s are annoying, and don’t live up to their full potential and I’m sure you could name several books/series that do such. I’m truly hoping that this will be one that just knocks the socks off of me, and actually has strong reasons for having a prophecy and isn’t just petty squabbling between gods and manipulations from lesser mortals.

#7: Slavery: Serfs or slaves, the books are hard hitting towards that particular subject. I do hope that the issue gets resolved towards the later end in a believable way.

#8: Bathing: I like that the characters are always concerned about bathing. Actually, that’s a lie. It seems that Pol is the only one concerned, and forces the rest of them to bath quite a bit. Unless you’re a girl, the men can’t seem to be bothered with it. It’s…quirksome.

#9: Horses: I *love* that Hettar understands the horses so. One of my favorite scenes in the first two books is how Durnik sits on a horse, and the horse sighs, and Hettar laughs and…well, you’ll just have to read it, but if you understand horses at all, you’ll find it amusing too.

And #10: The Length: The books read far too quickly. I flew through 300 pages in less than four hours, they go that fast, because they’re that fun. There’s so much rich detail, action, and conversation that it makes for an easy read. I hope that the books start getting longer, but they all appear about the same size, so probably not.

And there you have ten thoughts from me about the Belgariad Series by David Eddings. Have you read the series? If so, please don’t spoil me, I’m only just about to start book three. Chat about books 1 + 2 in the comments, if you will, because I really want to talk about them with someone whose read the series. Otherwise, 5/5 stars for both books 1 + 2, and I definitely plan on finishing the series as the week passes.